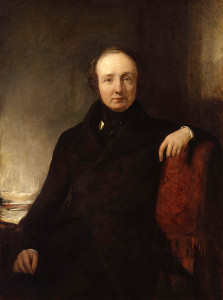 Lewis Cubitt, architect, was the third and youngest of a distinguished trio of brothers, the older two being the builders Thomas and William.  Lewis was born in London in 1799, son of Jonathan and Mary Agnes Cubitt (originally from Norfolk) and probably baptised at St Andrew’s Holborn.

Lewis was apprenticed to his brother Thomas in 1815 and later also received some training in the office of the architect  H.E.Kendall who designed for individual customers on some Cubitt developments.  Many of the housing developments constructed by Thomas were designed by Lewis.  By 1824 the three brothers were in partnership as “Messrs T.W and L. Cubitt”, but William broke away in 1827.  Lewis stayed on with Thomas until 1831, his last Belgravia designs being part of Eaton Square, and then he left for a partnership with William in the Grays Inn Road premises.

From 1841 Lewis set up his own architectural practice at 77 Great Russell Street. He designed greatly admired houses on the south side of Lowndes Square in Belgravia, though not for Thomas.  However, the brothers remained close and Thomas continued to recommend Lewis to private clients as an architect who would attend diligently to their interests. 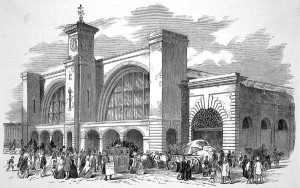 Lewis established a reputation as a railway architect, designing the Bricklayers Arms, London, station in rural Italian style, Bermondsey and the rebuilt London Bridge station (jointly).  However, probably his main claim to fame was the impressive Kings Cross Station (the London terminus for the Great Northern Railway) and the Great Northern Hotel next door, built in the 1850s on the site of a former smallpox and fever hospital. 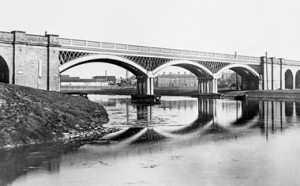 Lewis Cubitt’s cast iron railway bridge over the River Nene at Peterborough, still carrying the two up lines on the East Coast Main Line;  another bridge alongside now carries the other lines (Engineering Timelines)

Lewis also designed many bridges, mostly in South America, Australia and India.  His cast iron bridge at Peterborough carrying the East Coast Main Line over the River Nene is listed, and the only cast iron bridge in the UK to carry a high-speed train line. It was built by his brother William and nephew Joseph.  Lewis also designed a brick viaduct over the River Mimram at Digswell near Welwyn (475 metres long with 40 arches up to 30 metres high). To take only two railway lines, it is now widened but still a notorious bottleneck on the East Coast Main Line. 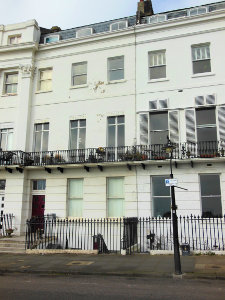 After 1852 Lewis Cubitt senior ceased professional work.  In 1855 he was left £10,000 by his brother Thomas, with £2000 each to Lewis’s daughters Ellen and Agnes.  Lewis’s wife Sophia died in 1879, Lewis himself on 9th June 1883 at his home in Brighton.  One executor was his grandson Algernon Cunliffe Bowring.

References for Lewis Cubitt are included on the composite list of sources consulted for Thomas Cubitt and all members of his family.  These are to be found on Thomas Cubitt’s page, but details for the individual family members are available if required.  Most of the sources mentioned can be viewed online via Ancestry, Find My Past and Free BMD.