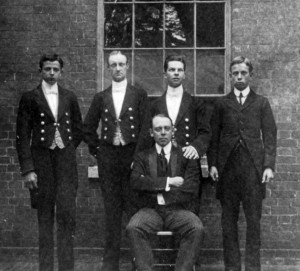 Denbies footmen about 1912.  Possibly they include Charles Hull and Benjamin Barnes. The roles of the seated man and the young man on the right are not certain – perhaps the butler and under-butler (Ranmore Archive)

Charles Hull’s full name was William Charles Hull and he seems to have been a footman at Denbies Mansion immediately before WW1.  At that period the household boasted at least three footmen, who wore the Cubitt livery of chocolate piped with red, and brass buttons embellished with the Cubitt crest and a coronet.  In the 1930s there were around 25 indoor staff and there is no reason to believe the pre-War numbers were any less, probably more.  As well as the footmen, there were a butler, an under-butler and a hall boy.  The male staff slept in a mezzanine wing above the service wing in the basement, ensuring suitable segregation from the female staff who occupied the top floor of the Mansion.

Before he arrived at Denbies, the 1911 census shows William Charles Hull working as a footman 15 miles away at the late Victorian house of Sandhills.  Set among acres of lush parkland just outside Bletchingley, Surrey, this splendid red-brick country house was built 1893 in Tudor style, with mullioned windows, tiled roof and tall chimney stacks. 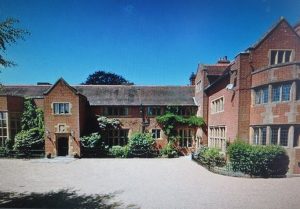 However, Sandhills was not in the same league as the magnificent Denbies Mansion (with its hundred rooms, extensive gardens and quarter-mile run of glasshouses), since there are only four other servants in the house on census night.

The occupant of Sandhills in 1911 was Bernard Walsh, aged 47, of private means, born Mortlake, Surrey.

William Charles Hull was born 7th November 1892 at 27 Irwell Place, Rotherhithe, quite close to the River Thames and the Pool of London.  He was baptised on the 30th November at All Saints, a church (now demolished) right at the entrance to the great complex of the Surrey Docks, and very close to Brunel’s Thames Tunnel (1843), the world’s first under a navigable river. The busy, noisy and dirty streets of William Charles’ childhood were a far cry from the tranquillity of the Surrey countryside around Bletchingley and on Ranmore Common. 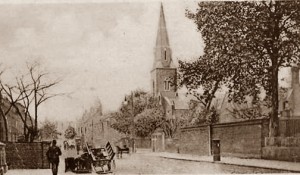 Old postcard of Lower Road, Rotherhithe, with the spire of All Saints Church in the background

William Charles was the youngest of the surviving children of John James and Louisa Hull.    John James had been a rice cleaner/dresser when the older children were baptised, but by 1892, at the time of William Charles’ baptism, he was a labourer.  When the boy was six, his father died aged 43, and his mother had to go out to work as a charwoman to support her family.

When WW1 broke out, Charles enlisted at Guildford in the 2nd Battalion of the Hampshire Regiment.  Two other men from Denbies obviously enlisted at the same time, since they were given consecutive service numbers.  Charles Hull has the first service number, so  was probably the leader of the enterprise.   One of the other recruits was Benjamin Barnes (probably another Denbies footman), the other a gardener Nathaniel Rice. The three landed together with the Hampshires in the Gallipoli theatre of war on 15th June 1915,  Within eight weeks they were all dead. 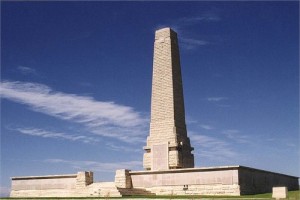 None of their bodies was ever found, so they are all three commemorated on the Helles Memorial to the Missing of Gallipoli, a tall obelisk that can be seen from ships passing through the Dardanelles. The trio who enlisted together, died together, and were also mentioned together in the Surrey Mirror article of 29th September 1916 on the memorial service to Henry Archibald Cubitt.  And the names of the three are also remembered together on the Ranmore War Memorial and on the Medal Roll of their 1915 Stars. 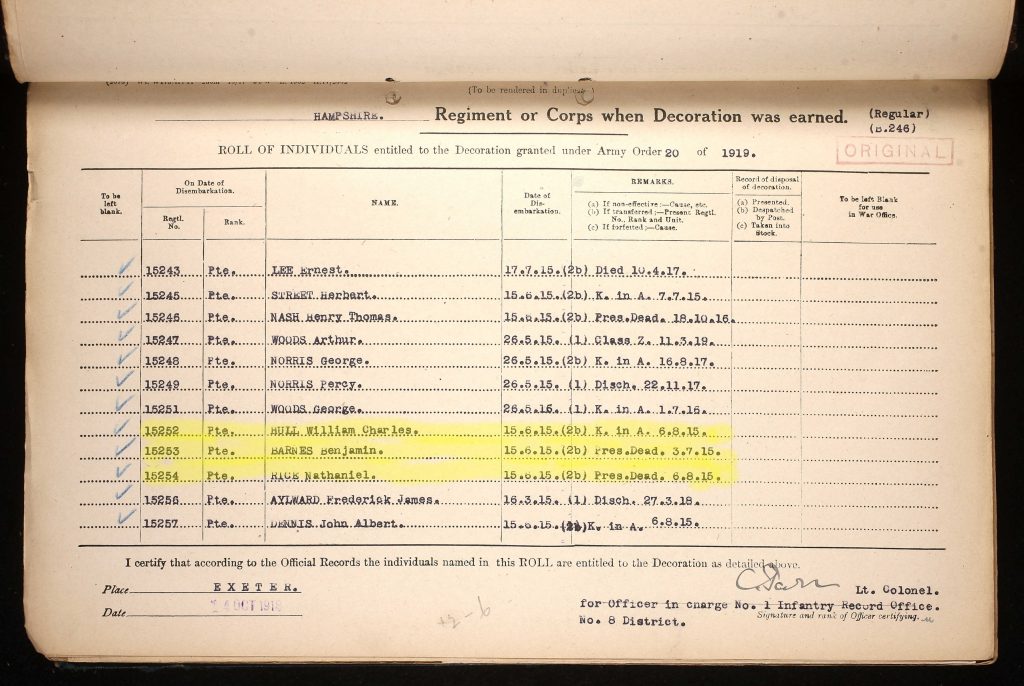 The 14-15 Star record, with adjacent entries for the three Denbies men (The National Archives)