Thomas Cubitt’s elder sister Mary Agnes was baptised in St Andrew’s Buxton on 7th July 1786 and married Andrew Cuthell in 1807 in St Andrew’s Holborn. The couple had two sons:  John Cooper Cuthell and Andrew Cuthell  junior.   Both parents died while their sons were young:  Mary Agnes in 1812 (very soon after giving birth to Andrew junior), the father Andrew senior, bookseller of Holborn,  in 1821.  In his Will of 2nd April 1821 Andrew senior made Thomas Cubitt executor of his Estate and guardian of his young sons and, thereafter, Thomas undertook much of his nephews’ upbringing, 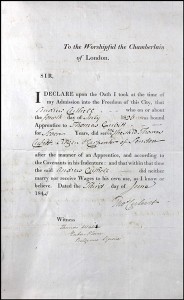 Andrew Cuthell’s Freedom of the City of London application in 1843, indicating his apprenticeship to his uncle Thomas Cubitt (London Metropolitan Archives)

Both Cuthell sons entered the building trade,  John being bound apprentice to his uncle in 1825.  He was more ambitious than his younger brother and disastrously launched into building on his own account .

As indicated on his Freedom of the City of London certificate, Andrew junior was also bound apprentice to Thomas Cubitt (in 1826), and by 1829 was working as a clerk in the office.  He remained with his uncle’s firm all his life, becoming Thomas’s right hand man, gradually taking over more responsibility, particularly on the speculative side.  He saw potential buyers, wrote letters of terms to would-be builders, and ordered quantities of materials.

Andrew lived in his uncle Thomas Cubitt’s house in Clarence Road, Clapham Park until he married in 1845.  His bride was Mary Anne Snell, daughter of a well known cabinet-maker, and they had at least four children: twin sons Thomas George and Charles Edward, a third son William Andrew, and a daughter Mary Sybil.  Andrew built his family a house called Laleham on the other side of Clarence Road from Thomas Cubitt’s Lincoln House.  In the 1851 census of Clapham, Andrew Cuthell was described as “Surveyor of Building”, and the Post Office Directory of that year designated him “Esquire”.  When Thomas Cubitt died in 1855, he made Andrew one of the executors and trustees of his Estate, and manager of the business at the (for the time) fantastic salary of up to £2500.  He also left him the very substantial legacy of £20,000 (though even the unfortunate brother John was left £4000). 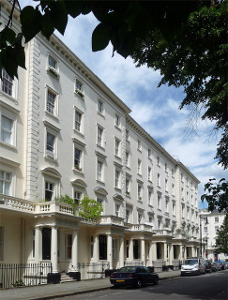 As executor Andrew was involved in developing the London properties further for a decade after Thomas’s death.  For example, he finished Warwick Square:  No 61 became his London residence, and his cousin Lucy (Thomas Cubitt’s daughter) lived at No 49 until her death in 1898.

By 1861 Andrew and his family were at Eastbourne, Andrew being a “Proprietor of House and Grounds”.  In the 1871 census (a magistrate but “of no occupation”) Andrew was visiting Thomas Cubitt’s widow Mary Anne at Denbies with his wife and two of his children, one of them his twin son Charles Edward.  In the same census the other twin Thomas George (eventually Lieutenant Colonel of the 13th Hussars) was staying at Fallapit House in Devon with his cousin William Cubitt, another military man.  When Charles Edward married Eliza Jane Jackson in 1875, his father Andrew Cuthell was described as “Architect” on the marriage certificate.

In 1901 their son, 46-year-old Charles Edward (barrister/solicitor) is living with his wife Eliza and a niece at Old Dene, a house at the foot of Bagden Hill, Westhumble.  Old Dene was reputedly built in 1899 by an “Andrew Cuthell” (presumably Charles’s younger brother William Andrew, since their father Andrew had died twenty years before).  In 1908 the house was bought by the Hylton-Fosters, Harry Hylton-Foster eventually becoming Speaker of the House of Commons.

References for Mary Agnes Cubitt (later Cuthell) and for her son Andrew Cuthell are included on the composite list of sources consulted for Thomas Cubitt and all members of his family.  These are to be found on Thomas Cubitt’s page, but details for the individual family members are available if required.  Most of the sources mentioned can be viewed online via Ancestry, Find My Past and Free BMD.