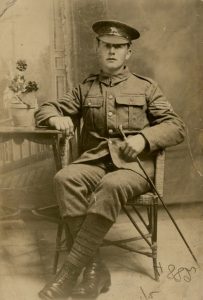 Serjeant Frank Woodman (photograph by kind permission of his grandchildren, whose copyright it is)

Frank was born in Marylebone on 29th August 1893 and baptised at St Mark’s, Marylebone Road.  He was the son of Rose Gibbs and Charles Woodman  and  by 1901 was living at Tanners Hatch, Bookham (the tiny, remote cottage on the edge of the Polesden Lacey estate, now a delightful off-road Youth Hostel).   In 1889 Frank started at St Barnabas School, next door toSt Barnabas Church;   when he later took up bellringing, he must have many a time climbed the 63 steps up its tall spire to ring the bells.  And, sadly,  his name now appears on the Church’s War Memorial,

According to the school logbook, Frank left St Barnabas School in March 1904  because he had “left the neighbourhood”.   In fact, the family had moved to Bailey Road, Westcott, and he subsequently attended  Westcott village school for a couple of years, until in 1906 he won a scholarship to Dorking High School (now the Ashcombe) – with another War Memorial on which, sadly, his name now appears.  In his scholarship exam, according to his much younger brother Kenneth, their mother was “most proud in particular because  [Frank] obtained the highest marks in the county for religious knowledge.” 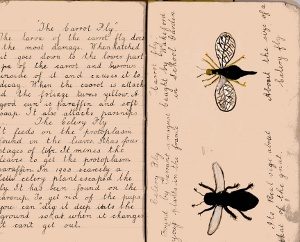 Pages from Frank Woodman’s school notebook (courtesy Westcott Local History Group). The boy Tarrant (George Henry) who found the celery fly  (above)  also won a scholarship to the High School and sadly was also killed in the war. Both lads are remembered on the Westcott War Memorial  (see below).

Frank was very interested in plants and gardening. His brother Kenneth later presented the Westcott Local History Group with the school notebook on plant pests and diseases that the young Frank had written and illustrated while at Westcott School.  On leaving Dorking High School in 1908, Frank followed up this interest and his father’s occupation by becoming a gardener.   Kenneth wrote, “He entered the service of the Lord Lieutenant of Surrey (the Hon. Henry Cubitt] at Denbies“ In the 1911 census,  Frank was living in the Denbies gardeners’ bothy with three other unmarried gardeners, and in the 1915 Electoral Roll he is registered to “Denbies Gardens”, although this entry is out of date since from the outbreak of war he was with his regiment. 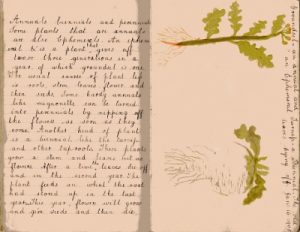 Probably  Frank enlisted with the local  Territorials in the last week of January 1912, initially for four years.  Brother Kenneth wrote, “I believe in those days it was a condition of service that they [Denbies employees] had to join the Territorial Army.”   World War 1 broke out on 4th August 1914, and on 5th September Frank married Jessie Egan in Dorking Register Office,  the marriage certificate stating he was a private in the 5th Battalion, The Queen’s (Royal West Surrey Regiment),. 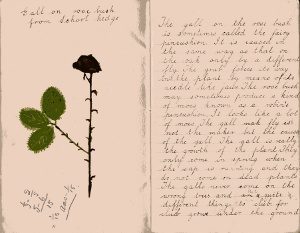 Jessie came from Newmarket and may have been in service in the Dorking area, possibly in Denbies laundry, following the occupation of her mother and sisters.  Frank’s parents Charles and Rose witnessed the marriage, and Jessie gave their then address (Victoria Road, Westcott).  Frank did not go abroad immediately since he was stationed at Windsor when he registered the birth of his and Jessie’s daughter in 1915. 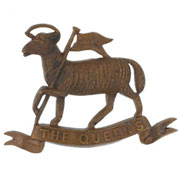 Frank was later transferred to the 2/4th Battalion of The Queen’s (Royal West Surrey Regiment) and eventually promoted to Serjeant (as had been his father Charles when he served at a regular in the Royal Dragoons).  According to his brother Kenneth, Frank saw service in Egypt.  The battalion was stationed in the Middle East in readiness for the Gallipoli campaign, and in Egypt  took part in the early stages of General Allenby’s march through what was then called Palestine (the march continued northwards through Syria until the Turks accepted defeat in October 1918).

Frank, however, was due for leave in June 1918 when his battalion was diverted from Egypt to France where it was needed, as part of the 34th Division, to reinforce the troops on the French sector of the front on the River Marne.  The Queen’s were engaged from 23rd July to 2nd August in the Battle of Soissonais-Ourcq when they mounted and endured lengthy and fierce  bombardments against the enemy lines.  After the war “Soissonais-Ourcq” was one of the battle honours awarded to the Queen’s (Royal West Surrey Regiment).

The regimental diary describes the ferocious actions that took place over those terrible summer days.  On 30th July “the enemy shelled continuously during the day and also used gas.  The artillery action continued throughout the night becoming especially violent at dawn, ceasing at 6 am.  The 31st was fine and hot with many flies; in the afternoon the enemy shelling began again and continued throughout the night. At midnight our Headquarters with those of the 4th R[oyal] Sussex moved forward to the front line.”   On 1st August the battalion  and the French mounted another attack which advanced the line 1000 yards.  “The morning [of] August 2nd was very wet.  Everything was very quiet throughout the day, and we collected and buried our dead…”

One of the dead was Serjeant Frank Woodman,  killed in action in one of these fierce onslaughts.    He had survived nearly four years of a war which had only another few months to run and, when he might have returned home to his family and safety, he was buried in the Oulchy-le-Chateau Churchyard Extension which holds the graves of 91 British soldiers. 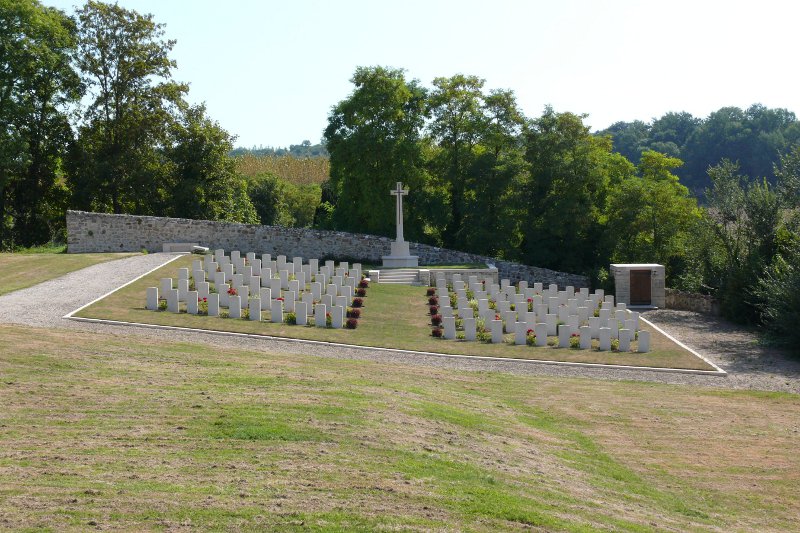 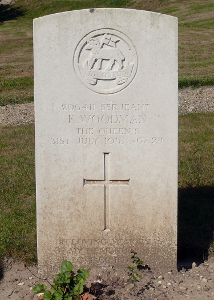 The touching inscription on his gravestone reads:

OF MY DEAR HUSBAND.

IF LOVE COULD SAVE, THOU HADST NOT DIED –

Posthumously, Frank was awarded the Victory and British War medals.  As well as the Ranmore and Westcott War Memorials, he is commemorated on the War Memorial in Dorking High School (now The Ashcombe School): a tablet  carved by the woodwork master, Mr Ashby. 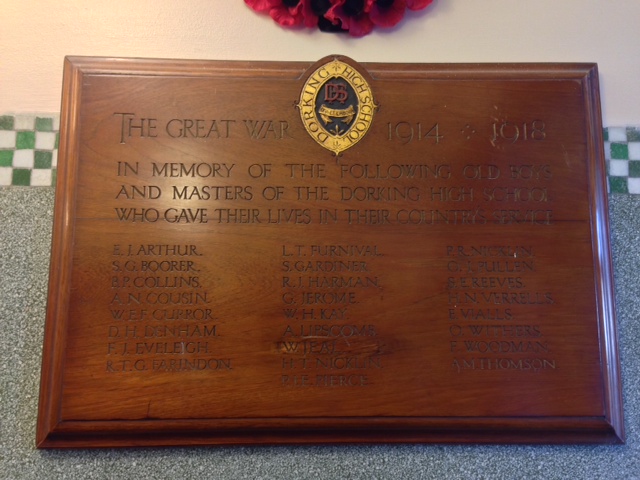 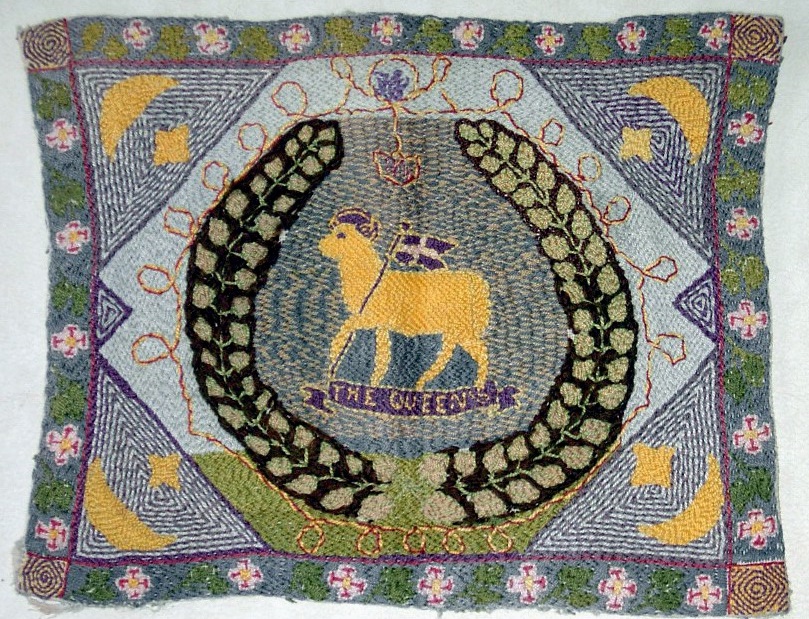 Embroidery  of The Queen’s (Royal West Surrey Regiment) badge, among Frank Woodman’s effects, possibly sent home by him from the Middle East (shown here by kind permission of his grandchildren) 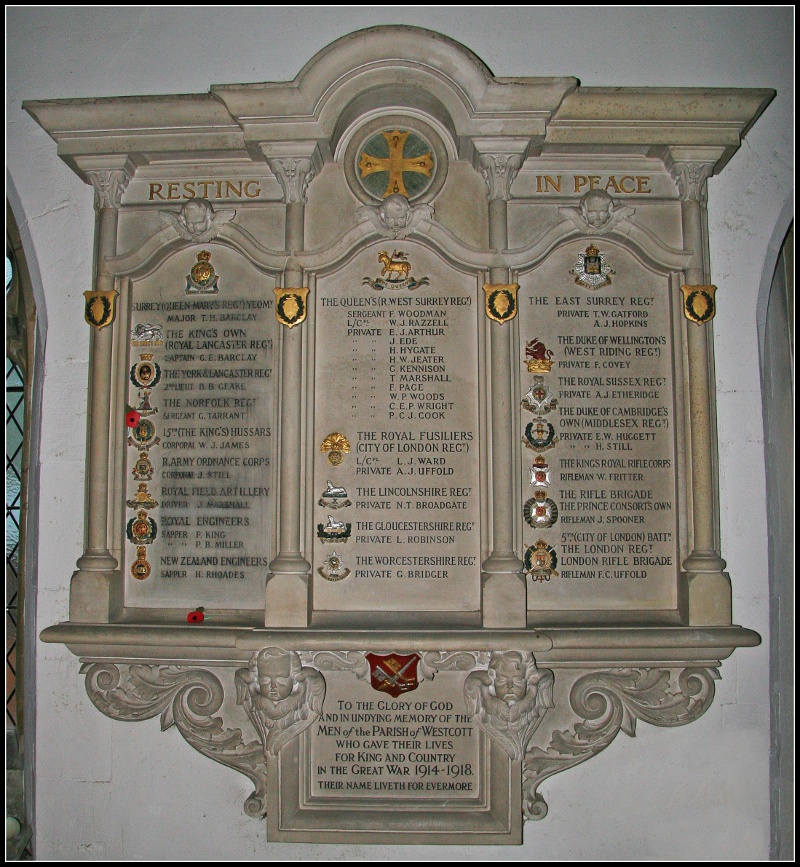 Westcott War Memorial.   Frank’s name is top of the central column, his school friend George Tarrant’s the fourth name down in column 1. Tarrant fought with the Norfolk Regiment and won the Military Medal (photograph Andy Bailey)