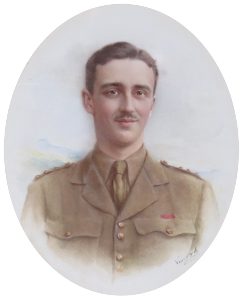 Henry Archibald  Cubitt was the eldest of the six sons of the Hon. Henry Cubitt and his wife Maud Mariamne nee Calvert, and grandson of George Cubitt, 1st Baron Ashcombe.   Born at his grandparents’ London house (17 Princes Gate, Knightsbridge) on 3rd January 1892, Henry Archibald was baptised at the nearby All Saints Ennismore Gardens on 6th February, and named after his father and maternal grandfather.  The officiating priest was the Rector of St Margaret’s Ockley (Maud Mariamne’s parish church), who had married the baby’s parents there in August 1890.

Henry Archibald was educated at Stone House School, Broadstairs, and Eton College.  In the 1901 census, presumably home for the Easter holidays, he is with his parents in London at 20 Princes Gate, Knightsbridge, along with four younger brothers:  Alick George (1894), William Hugh (1896), Roland Calvert (1899) and Archibald Edward (1901).  (The youngest Charles Guy was not yet born,) 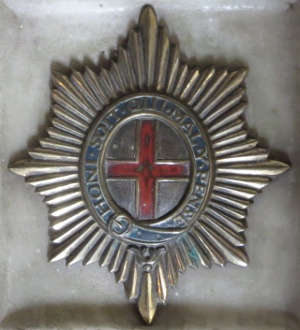 The Coldstream badge in the altar pavement in the Cubitt Chapel, St Barnabas

According to his obituary in The Times of 23rd September 1916, Henry Archibald obtained his commission in the Coldstream Guards on 4th February 1911.  In the census two months later, as a nineteen-year-old Second Lieutenant, he was in barracks with the 3rd Battalion at the Tower of London, in Whitechapel registration district.

The “Dorking and Leatherhead Advertiser” of 11th January 1913 reported that on his coming of age Henry Archibald Cubitt had received an engraved silver tray from the “Household at Denbies and Princes Gate [the London house] and employees on the Denbies and Birtley Estates”.  Tenants on the Estate also gave the young man two engraved George III silver tankards.

However, most of the newspaper’s column was devoted to an occasion in the Upper South Room of Dorking Public Hall.  Harry was presented with a silver tray inkstand and an album of purple leather with the family crest and containing an illuminated address.  This presentation was the result of a subscripion  by nearly 100 of the principal inhabitants of Dorking,  The event was attended by Harry’s parents, various senior relatives and his three youngest brothers.  In his charmingly ingenuous speech, Harry  expressed his grateful thanks for the presentation, saying it was his first attempt at public speaking and he was extraordinarily nervous (much laughter).  He had been thinking over what he should say for a whole week and had to confess he had now forgotten all he had intended to say (renewed laughter).  He ended by saying he was extremely grateful to them, and [a sadly ironical remark in view of his future fate] “he sincerely hoped he might continue to live amongst them for many years to come” (applause)

On 12th August 1914, eight days after the outbreak of World War 1, the 3rd Battalion of the Coldstreams left for France as part of the Guards Division.  Henry Cubitt was transport officer.  He was promoted First Lieutenant in December 1914. and took part in the Retreat from Mons, at one stage taking temporary command of the battalion. He also fought in the Battles of the Marne and Aisne.  In  June 1915 he was promoted temporary Captain, Adjutant a few months later, and was confirmed as Captain two months before he died.  He was the only officer to serve continuously in the battalion throughout the first two years of the war.  He was mentioned in despatches and awarded the Croix de Chevalier of the Legion of Honour.  The  logbook of St Barnabas School says that “Mrs H. Cubitt visited and showed the children the Legion of Honour awarded to her son Capt. H. Cubitt”.

During the Somme offensive in 1916, the Guards Division was deployed in the Ginchy-Les Boeufs section, and on 15th September at 6.20 am attacked in a slight mist behind a creeping barrage.  The regimental history notes that three battalions of the Coldstreams attacked in line together “as steadily as though they were walking down the Mall…  Almost immedately …  two Coldstream battalions came under the most terrific machine gun fire from the Flers-Ginchy sunken road”.  The first waves of the assault were literally mown down “and Major Vaughan, the Second-in-command of the 3rd Battalion, and Capt. Cubitt, the Adjutant, were both killed before they had gone a hundred yards.”   Visiting the site 81 years later, Sir Hugh Cubitt was able to stand on virtually the exact spot at which his uncle had been shot soon after zero hour leading his men “over the top”. 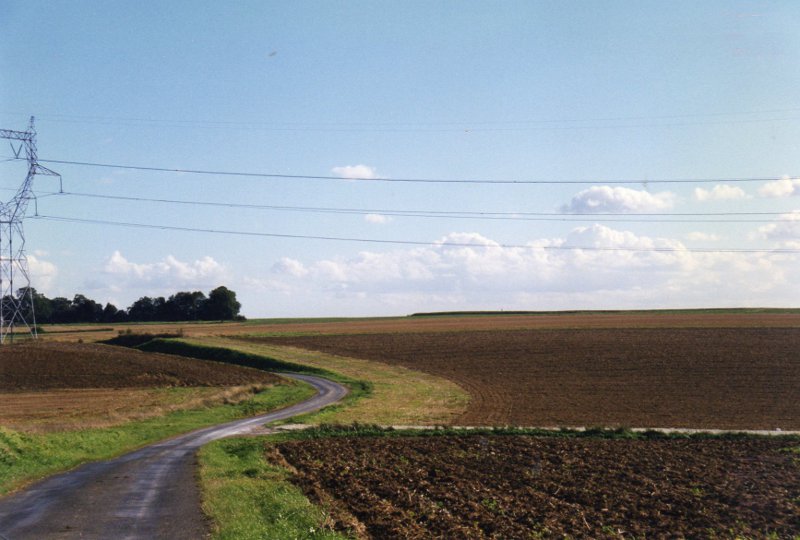 The “sunken road” at Ginchy where Harry was killed on 15th September 1916. This photograph was taken in 1997 by his nephew Sir Hugh Cubitt, whose copyright it is.

Because this was the first ever day of tank deployment, there needed to be gaps in the barrage, but these allowed intense machine-gun fire from the enemy to enfilade the flanks from shell holes and wrecked trenches.   Added to which, the tank supposed to be supporting the Guards Division broke down and, such was the state of communications at that time, the frontline troops never heard of this, so went over the top as scheduled but without the tank support.

There is a story that one of the three Cubitt brothers was riding near the Front and saw a sergeant and stretcher party who had been ordered to carry away the body of an officer who had just been killed and who was of a family of some importance.  On asking to be shown the body,  he remarked, “My God, it’s my Brother!” and rode away.

If this is true, one can speculate whether it was Henry or Alick’s body.  Since Alick’s body was never found, it  would seem more likely to have been Henry’s.  Which poses the question, was the other brother Alick or William Hugh?   It seems more likely to have been Alick because his regiment the 15th (King’s) Hussars (under the command of the 9th Cavalry Brigade in the lst Cavalry Division) was in the same battle as Henry, whereas William Hugh’s regiment does not appear to have been so.   It will be interesting to hear other people’s views on this deduction.

Later that day, the battalion commander, Colonel John Campbell, to whom Henry was Adjutant, used his hunting horn to rally the depleted remnants of his troops and to seize the objectives in a headlong rush, for which he was awarded the Victoria Cross. 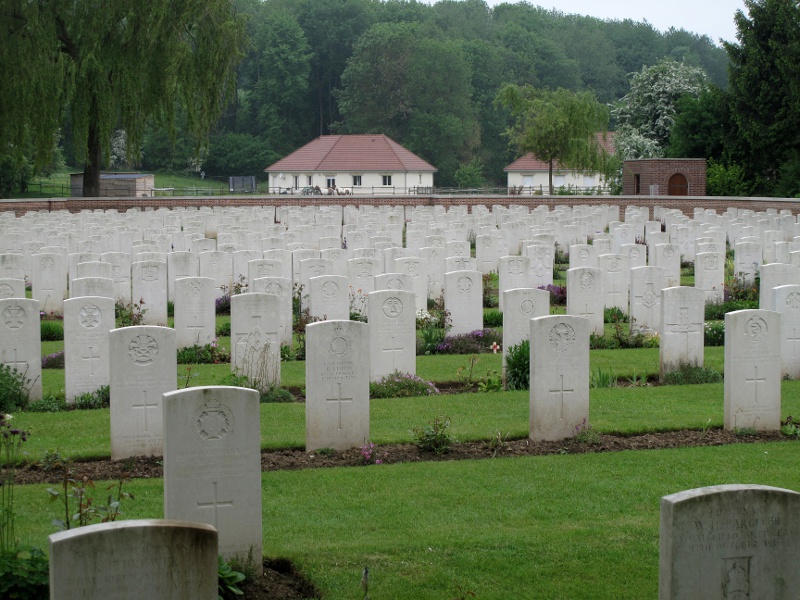 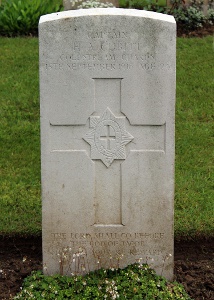 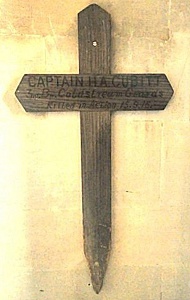 Captain Cubitt was buried among 850 other servicemen in the secluded Carnoy Military Cemetery on the south side of the village of Carnoy, 10 kilometres from Albert.  His original wooden grave marker and the subsequent larger one found their way back to St Barnabas and hang in the Cubitt Chapel.  For his final stone grave marker his family selected a similar Biblical verse from Isaiah chapter 52 as later set in the pavement of the Cubitt Memorial Chapel in St Barnabas:

Ten days later, on September 25th a memorial service was held at St Barnabas Ranmore Common for Captain Henry Archibald Cubitt (“Master Harry” as he was known by the parishioners).  It was a measure of the community mourning that the service also commemorated the five men who had left the estate to enlist and had also died, namely Frederick Buckland, William Thomas, Benjamin Barnes, Charles Hull and Nathaniel Rice.  A muffled peal of bells preceded the service.  The government did not repatriate the bodies of the fallen, so memorial services contained elements  of the burial service, including hymns, address, catafalque and the Last Post (in this case sounded by six buglers from the Coldstream Guards). The local newspaper ran a piece on this melancholy but uplifting occasion.  Among the family mourners was “Canon E.A.Chichester”, the bereaved father of Henry Archibald’s cousin Capt. W.A.G.Chichester who had died on the same day as Henry.

Henry’s unofficial fiancee Pearl Barrington-Crake wrote in her diary for that day: “They are having a memorial service for him at 3.30 at the Denbies Church today.  Especially today so that Rolie, Archie and Guy could be there before they go back to school tomorrow…. I spent all the time writing to Mrs Cubitt during the time of the Memorial Service.”  The engagement between Pearl and Henry had not been formally announced but was a private matter between members of the family.  Pearl later became Lady Montagu of Beaulieu and subsequently the Hon. Mrs Pleydell-Bouverie.

Pearl’s friendship with the Cubitt family endured.  Sir Hugh Cubitt (Henry’s nephew) said that Pearl “was much beloved in the Cubitt family, especially by Lady Ashcombe, who looked upon her very much as the daughter she had never had”.  Pearl survived Henry Archibald Cubitt by 80 years, dying in 1996 aged 101.

In 1917 Harry’s father, now 2nd Baron Ashcombe, petitioned the Bishop of Winchester for permission to convert the South Transept of St Barnabas Church into a memorial chapel  to Henry Archibald.  The altar, reredos and pavement were designed in his honour and an inscription to him placed around the pavement, along with an inset Coldstream badge. The full glory of the memorial is shown on the page on the Cubitt Chapel, as it is now known.

Before the work was completed, Lord and Lady Ashcombe received news of the death of their second son Alick George, and subsequently of their third son William Hugh, so the design of the Chapel was modified accordingly.  The Chapel, and who and what it represents, has always been held in great respect and affection by the church community and is maintained with loving care. 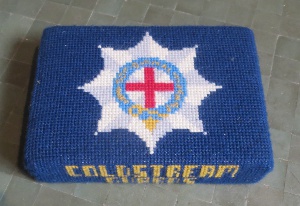 Grateful thanks are also due to Elizabeth Loving for the extract from the diary of Pearl Barrington-Crake, later Lady Montagu of Beaulieu, subsequently the Hon. Mrs Pleydell-Bouverie.