Tracking down those who were in the Home Guard or served on the Home Front during the War is no easy task, and so this page and its companion They Also Served (World War 2) are very much a work in progress.  Facts have been jotted down in various ways and at various times as they came to light (often while researching another family member). so there is, therefore, often inconsistency of treatment, which will be addressed in time.  Also, sources have not yet been listed, but again this will be remedied in due course,

It is hoped that more information can be added to this page as it is discovered.  If you have information to add or correct, or photographs of these or other people who served on the Home Front at Denbies or Ranmore Common, please contact us.

Denbies had its own Home Guard, but the House and the gravel pits at the eastern end of the Common were used as a regional headquarters and training centre, run by Major Hugh Pollock (husband of Enid Blyton).  There is a fascinating list of the courses held at the training centre on the Dorking Museum website https://www.dorkingmuseum.org.uk/wartime-at-dorkings-mansions/

When the Denbies Home Guard platoon was formed, the gamekeepers (Walter Hitchcock,  Arthur Walder and George Mackenzie Mackay) would take along their  guns, the others having to parade with pickaxe handles (very “Dad’s Army”), according to George Mackay.  He also said that their code name was “The Blackberries”.

The photograph  below shows some who served (many wearing medal ribbons from the  Great War).  Many were identified by George Mackenzie Mackay not long before he died in 1999,  and we are very grateful to his daughter Norma Murray for passing them on to us.  Other names were supplied by the late Elsie Margaret Royal (who died in 2006). and all names were examined in 2017 by Elsie’s sister Rene Mackie nee Royal, to whom we also extend our thanks.

It is natural that so many years after the event that there are discrepancies in the identity of a few of the men, so, where these have occurred, we have inserted both suggested names to a man’s picture, and indicated by the initials EMR and GMM the source of each identification.

There are also, a few duplications of names, eg Haynes and Woods, and it is not certain whether  these are the same man included twice in error, or two separate men with the same surname, probably family members.

Especially In these instances it would be wonderful to know which of the two names is the correct one, and also to put names to the few faces still labelled as “Unknown”.  So if you know, or think you know, who they are, or have more information about the named men, please contact us. 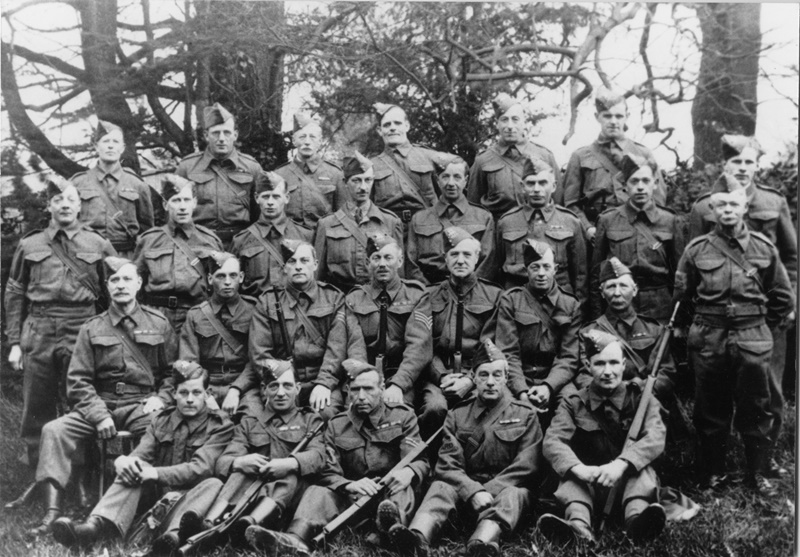 Details are given of the men as far as is known:

Walter HITCHCOCK, gamekeeper 1911, Estate bailiff towards the end of his working life. No. G 2323 , Quarter Master Sergeant of The Queens.  prev. reg 8 RWS . British and Victory Medals.  A/WO. Cl II.  Married Rachel Eliza Jobson 1917.  During the war he and his wife lived at one of the two Fort Cottages, as they had since 1919, still being registered there in the 1945 Electoral Roll.  He is reputed to have been very military-minded, so maybe it suited him to live in a one-time military establishment. Later lived at Keepers Cottages, and then Old Dene Cottages. Buried 1983 aged 91 with wife (1987 aged 98) in  St Barnabas churchyard (grave Q9). 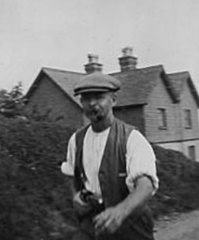 Harry Braustyn HYLTON-FOSTER (later Sir Harry), barrister, MP from 1950. Knighted 1954 on becoming Solicitor General.  Speaker of the House of Commons 1959 until sudden death in 1965.   His wife  Audrey was given a life peerage (Baroness Hylton-Foster, DBE) in his honour. Lived  Old Dene, Bagden Hill, Westhumble, also Westminster at death.  Buried 1965 aged 60 with his wife (2002 aged 93)  in the churchyard at St Barnabas (grave H15) .

ISAAC LUFF (senior), member of an old Ranmore family. b. 1881, son of Henry and Jane Luff  of Bagden Farm.  Pony boy at Denbies at the age of 12, then worked in Denbies Gardens. Served in World War 1 (see They Also Served World War 1). Married Amelia Dennis, lived Rose Cottage, No 2 Lime Tree Cottages, and West  Cottage (at death). Clerk of Parochial Church Council or Verger 1901 until his death in 1955. Buried in St Barnabas churchyard (grave L15) aged 74 with his wife (1963 aged 81)   See They Also Served World War 2 for his son Isaac Henry Luff (junior). 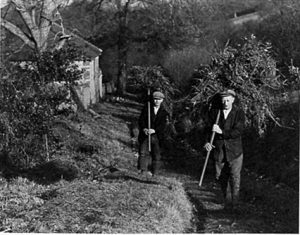 … WOODS, ? gardener – see comment above about duplication of names 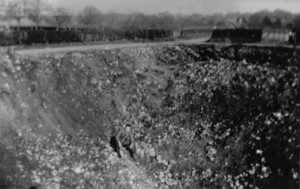 Ranmore Common saw some wartime activity.  A bomb fell near Dairy Cottages and there was a gun pit near North Lodge, the entrance to Denbies off Ranmore Common Road.  There was a searchlight near Lonesome Cottage. 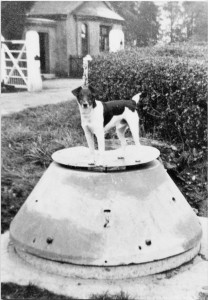 A gun pit by North Lodge. One wonders who owned the terrier? (Dorking Museum)

On the western edge of the Common in a barn at Dunley Hill Farm a sentry box was discovered, and there are still remains of Nissen huts in the fields.  Units of the Canadian Army – possibly the 6th Armoured Regiment (1st Hussars) – were encamped over most of the North Downs including Ranmore in preparation for the invasion of France on 6th June 1944 (D Day). When they left Ranmore, they did not take with them some of their equipment which was not serviceable including tanks and troop carriers. 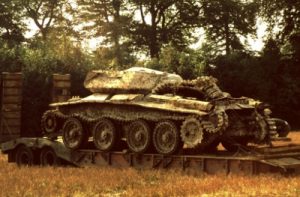 The “Covenanter” tank after excavation in 1977 (Ranmore Archive)

In the 1970s a cruiser tank (the “Covenanter”, the first such tank to be given a name) was dug up on  Bradley Farm, then a pig and cattle farm, now Denbies Wine Estate vineyard.  It was only ever used for training because by 1943 its armour was considered too weak to deal with new German tanks.  It was one of four tanks buried when the Canadian Army left in 1944.  Former gamekeeper and Estate bailiff, Walter Hitchcock (see Home Guard  picture above),  identified Its place of burial.  It is now in the Army Tank Museum at Bovington.

In 2017, five feet down in the chalk rubble under Denbies Wine Estate vineyard, the burial site of a second Covenanter tank was identified by Manchester tank enthusiast Rick Wedlock, using his magnetrometry equipment and a small digger.  The digger’s bucket first struck the gun turret, then uncovered the front armoured louvres and the driver’s observation hatch.  This second tank was excavated on 23rd May 2017,  surprisingly still with a working wheel and original 1940s fuel.  After six months on display at Denbies, it was removed for restoration by Rick Wedlock, although it will return each year on the anniversary of its excavation so its progress can be reviewed. Possibly there are other tanks still buried, as well as some  other  military relics. 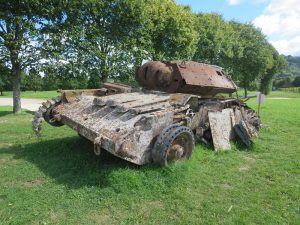 The second tank after excavation, on display at Denbies Wine Estate August 2017 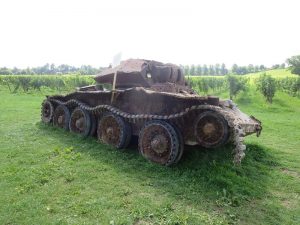